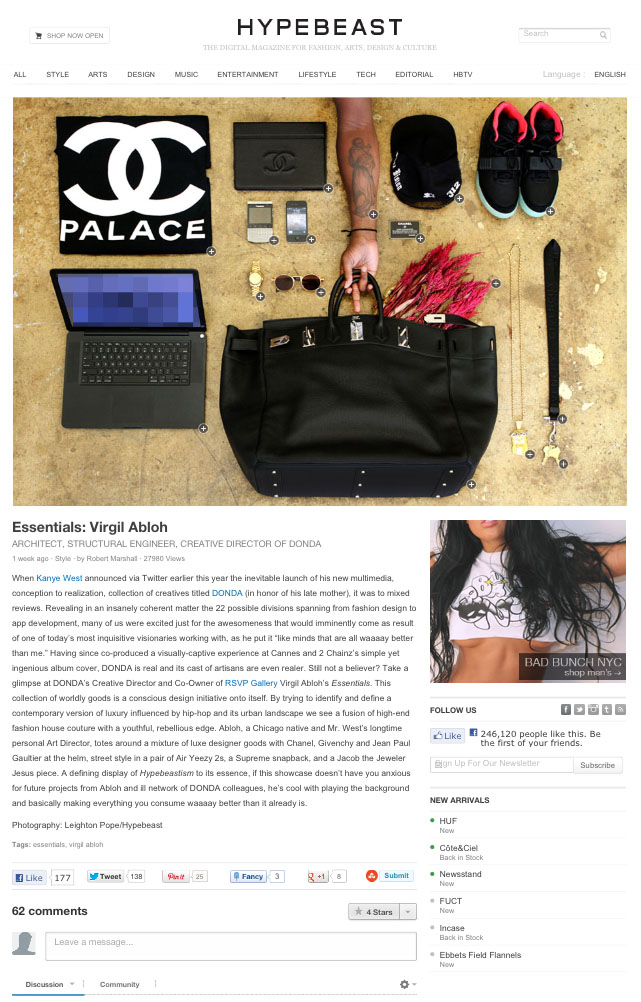 Essentials: Virgil Abloh
ARCHITECT, STRUCTURAL ENGINEER, CREATIVE DIRECTOR OF DONDA
Style – by Robert Marshall 27989 Views
When Kanye West announced via Twitter earlier this year the inevitable launch of his new multimedia, conception to realization, collection of creatives titled DONDA (in honor of his late mother), it was to mixed reviews. Revealing in an insanely coherent matter the 22 possible divisions spanning from fashion design to app development, many of us were excited just for the awesomeness that would imminently come as result of one of todayâ€™s most inquisitive visionaries working with, as he put it â€œlike minds that are all waaaay better than me.â€ Having since co-produced a visually-captive experience at Cannes and 2 Chainzâ€™s simple yet ingenious album cover, DONDA is real and its cast of artisans are even realer. Still not a believer? Take a glimpse at DONDAâ€™s Creative Director and Co-Owner of RSVP Gallery Virgil Ablohâ€™s Essentials. This collection of worldly goods is a conscious design initiative onto itself. By trying to identify and define a contemporary version of luxury influenced by hip-hop and its urban landscape we see a fusion of high-end fashion house couture with a youthful, rebellious edge. Abloh, a Chicago native and Mr. Westâ€™s longtime personal Art Director, totes around a mixture of luxe designer goods with Chanel, Givenchy and Jean Paul Gaultier at the helm, street style in a pair of Air Yeezy 2s, a Supreme snapback, and a Jacob the Jeweler Jesus piece. A defining display of Hypebeastism to its essence, if this showcase doesnâ€™t have you anxious for future projects from Abloh and ill network of DONDA colleagues, heâ€™s cool with playing the background and basically making everything you consume waaaay better than it already is.